Bitcoin’s price has continued to extend its recent rally to a price level beyond $8,000.

In the past 24 hours alone, Messari data reveals more than $27 billion worth of bitcoin was traded across exchanges, whereas $2,1 billion was traded solely on the 10 exchanges Bitwise Asset Management identified as the only exchanges reporting honest volume figures.

While vigorous, today’s development is not an anomaly. In fact, bitcoin’s price increases have been aggressive for much of 2019 and rose more than $1000 dollars once again just two days ago.

In the past 90-days alone the cryptocurrency has increased 127 percent in price, nearly 60 percent of which was accrued in the last 30 days alone, Messari data reveals.

The USD value of most cryptocurrencies are seeing notable increases as a result of bitcoin’s rebound, including the likes of Binance Coin (BNB) and Bitcoin Cash (BCH) both of whom are reporting double-digit 24-hour gains.

That said, bitcoin’s percent share of the capitalization of the total cryptocurrency market is now a 60 percent – its highest since Dec. 11, 2017 according to Coinmarketcap, and a sign its growth is outpacing the rest of the broader market.

Interestingly, a very similar and parabola shaped price increase like the one bitcoin has just witnessed occurred at the end of the previous bear market in 2015.

As can be seen below, bitcoin’s price trend entered a parabolic rise after reaching a low of $198 on Aug. 25, 2015 followed by a  near 150 percent increase before temporarily topping out at $499 on Nov. 4th of that year. 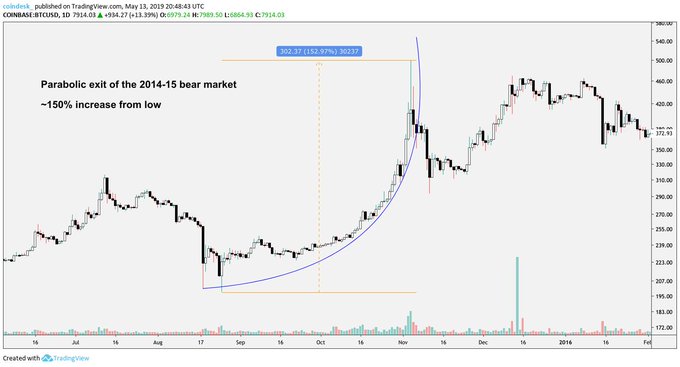 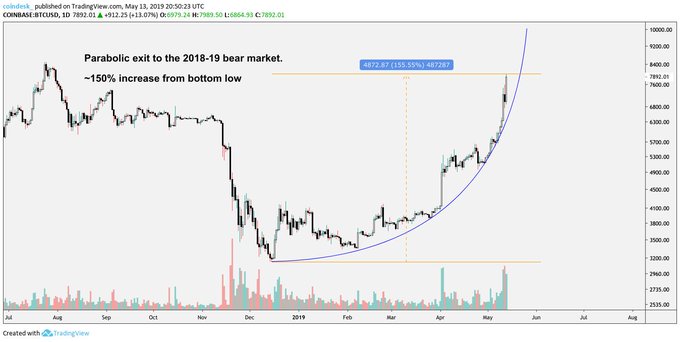 The current parabolic rise looks very similar to how the previous bear market in 2014-15 ended. $BTC/USD increased roughly 150% from previous lows on both occasions.

Indeed, history seems to be repeating itself, or at least rhyming, as bitcoin’s market has once again entered a parabolic structure having increased nearly 150 percent from its most recent low of $3,128 set on Dec. 15, 2018.